Muscle Suit Makes All the Difference for Cosplay

What a wonderful thing … the difference a muscle suit makes! If you’ve ever done any type of cosplay and you’re NOT a body builder, then you know that spandex doesn’t necessarily show off your amazing musculature in the way you expected / hoped. That’s the case for me, anyway.

Hey I’m a regular guy (mostly)! I’m not tall, not muscular, heck I’m not even a male model! I don’t have sculpted abs nor a chiseled jaw. Nor do I spend 4 hours a day every day working out and taking creatine. I know I know, it’s surprising. What I am, though, is someone who loves getting in costume and having a good time! But if I’m going to wear a costume, I want it to look good. No, scratch that. I want it to look great. That means it needs to look the way it’s supposed to. And let’s face it – most superheroes have some pretty good physiques, better than most of us.

So how does one bulk up and get big and muscly enough to be Batman? I guess just move into a gym and make that your life! Seriously have you seen Batman’s workout routine? Well if not, it starts with 5 sets of 7 deadlifts at 620lbs … you know, just to warm up! Ha ha ok.

Even with regular working out – which one should probably do just because – neither you or I will ever look like Batman in spandex. Especially not in time for the next con! So what can you do? Well .. you gotta get yourself a muscle suit!

After the first couple of times I wore my Superman costume, I realized that I wasn’t really filling it out enough. Again, surprising I know. Of course that’s even more apparent when you’re not eating right and not working out even a little bit! I don’t care how many corndogs you eat. Here’s a classy shot of me when I thought a “Superman at home” set of very amateur pics was a good idea: So after doing a bit of research on something called a “muscle suit” online, I found that sure there were a few options, but they were terrible and expensive! Pretty sure they looked a lot like this: 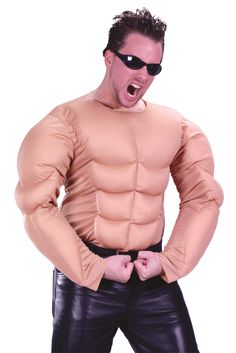 I did find one that looked a bit more professional. It really wasn’t too bad but still cost a few hundred dollars and definitely wouldn’t look right under a suit. It looked like a good try, but I could tell the muscles look too “hard” and are far too pronounced and unnatural for me. I’m not sure what kind of pecs are shaped like that, but luckily not mine: 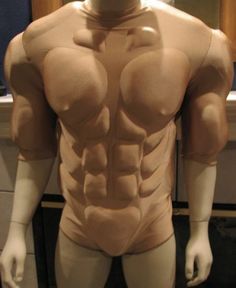 So, I decided I’d make my own – Superhero DIY style! Looking at the muscle suit above, it’s clear that it’s just foam inside some spandex. So that’s all I needed to go!

For materials, I stopped by Target and got a couple of spandex workout shirts, then some foam from Michael’s. The type of foam is important here. The foam couldn’t be too soft – since everyone knows my muscles are like granite – but soft enough that one could cut and mold the foam to look like muscle. I also grabbed a couple of shoulder pads since that makes that part easy.

If you want the quick version, here’s the (OLD) video.

In the video’s opening, you can see the foam pieces I cut out, including:

I’m not sure what that ab line even is, but it’s basically your rib cage. I found that it made everything look better if I just threw that in there too.

I cut each piece as best as I could, sizing them for my body and making sure to round each piece of foam out so that it looked more like an actual muscle. Just using scissors worked fine, although I’d recommend fabric scissors.

After cutting each piece, I basically glued those pieces in the right place on one of the shirts, then cut pieces out of the second shirt and sewed that around each muscle. That step was to protect the foam, hold it in place, and give the muscle suit a smoother, rounded look overall. Just cutting off the extra fabric was the last step: And the muscle suit was all ready to go! Check out the difference (and sorry for the potato-quality pics, it was ’07!): Here’s a video showing the huge difference that even this suit makes for me when wearing the Spidey costume! I am in a bit better shape than I was back in 2007, but still, a little help … helps:

Even after putting together that great suit, I found I wanted something even more impressive. Something that would really make any superhero costume look great! I believe it was a few years later, in 2010, that I came across a small company called Flex Design Costumes. It looked like someone had finally done what needed to be done and put their mad skillz to use to put together amazing muscle suits!

I had to have one! I believe it was even before they had their own online store that I bought a suit from Flex Designs. In my mind it was crazy expensive and I wasn’t sure if I should have even made the purchase, but after putting the suit on, I knew it was meant to be. This thing is incredible. I mean just watch the video and excuse the beard – it was 2010 after all!

I’ve had this suit for six [ UPDATE - 8 ] years now, and it’s still in awesome condition! However, I have only washed it a handful of times and really wasn’t sure I was doing it right. SO I emailed Flex Designs and asked them exactly how I should be doing it — and they responded back! They not only told me how to hand wash the suit, but offered to add extra stitching that they didn’t have the ability to do back in 2010! How awesome! Now the suit has extra stitching and should last at least another 10 years. Sweet.

So, if you don’t want to make your own suit, I definitely recommend getting a muscle suit from Flex Design Costumes.

What steps have you taken to look even better in your cosplay? Let’s start a discussion in the comments!