Seriously. And Rey’s character in Star Wars Episode VII: The Force Awakens is no joke! She is introduced as a no-name scavenger, yet we quickly learn she is far more than that, and capable with and without the Force! She certainly is a sorely-needed strong female character in a huge movie and worthy of imitation. And if I can make a budget DIY Rey costume, then why not?

And since I’ve been building a Kylo Ren costume for Denver Comic Con 2016, I thought it only appropriate to be accompanied by Rey. And who would make a better Rey than the wife? That’s right – no one.

She’s the right size, brunette, cute, and didn’t fall asleep during the movie! Perfect! One caveat was that this had to be a budget DIY Rey costume especially since it probably isn’t going to be worn as often as I’d like. Since I couldn’t go too crazy buying stuff, it’s time to build it myself. Before I got started, I spent some time in the big Rey costume thread on the Replica Prop Forum, which has a lot of great builds and ideas.

Here's a preview of how it came out - keep reading to see how I made it! 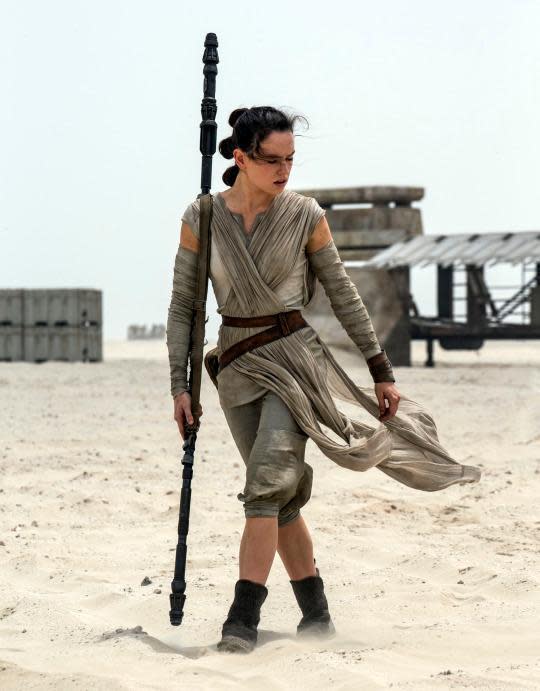 Even though the costume appears simple, it does have a lot of separate pieces and each is very custom.

Let’s start at the top, which seems to be just a shirt with a cut open collar. OK, what about that tabard that flows around her? My first question is: what the heck is that even for? Oh well … I’m having more trouble figuring out what color that is than its purpose.

Then there are those arm wraps. Are those just because she hasn’t been able to find a shirt with long sleeves? Or are they perfect for the hot desert days and cold nights? I don’t know, but I do know they’re dirty.

Same with those pants – which could be grey, could be brown, I don’t know. I’m having trouble determining the colors in this whole thing!

Then there is that leather belt, which appears to be just one piece. Perhaps a 3-4″ leather strap that has been cut in two in order to function as separate straps to carry that bag on her right hip? Then the leather wrist cuff, which certainly has a design and function of its own (not sure what that function is).

The only part of this costume that doesn’t look like it has to be hand-made from scratch is the boots. I actually was able to find those boots, since apparently they are made by a Portuguese company named Po-Zu. They could be had – before they sold out – for a cool $180+shipping. No I didn’t buy them, but I probably should have. It really would have upped the cost of this budget DIY Rey costume, but probably would have been worth it to complete the ensemble. They’re really nice looking boots: Well, I didn’t get them and now they’re sold out, so let’s move on.

Yes, yes, I started off with the pants. They seem pretty simple, like lazy pajama pants that you might wear around the house. Sure, it looks like Rey cut them off then wrapped some of the fabric around them just below the knee to keep her cool, but really who hasn’t done that?

It was fairly easy to find some nice linen fabric at Joann Fabrics, but then I had to dye it the right color. I just threw it in a tub with some grey Rit dye, and they turned grey. Amazing!

Oh yeah – I forgot that I actually have to sew the fabric into pants! I’ve sewed things before, but never actually constructed something nice from scratch. I did sew all those straps onto my Captain America costume, but that didn’t have to be perfect and was certainly not from scratch or using a pattern.

So I signed up for a Sewing Lazy Pants class at Joann (perfect)! The class taught me – among other things – how to use a pattern and arrange the fabric along the salvage so that I don’t have weird shrinking. Of course I was the only male in the room, but the instructor treated me like anyone else and was incredibly helpful.

I was able to mostly complete the pants during the class, then came home and butchered them (like Rey) to get that awesome look! The wife tried them on and I had to tailor them a bit, but they turned out pretty darn good. The next piece of the budget DIY Rey costume was the shirt. I didn’t need a sewing class for this, so I just found a pattern that would work and got some cheap 100% white cotton fabric. It was just a typical shirt pattern that could be with or without sleeves. I chose to make it with sleeves at first, but I removed the sleeves only after she had the whole costume on! So I basically just sewed the front to the back, then made a cutout at the collar, and hemmed the whole thing. I also made a couple cuts on each side of the shirt at the bottom – not sure if that’s accurate but it looks good! What is a tabard anyway?

The tabard is kind of confusing. It looks like a very light fabric that could easily blow in the wind, but also is kind of … “crunchy”. I started with a very soft cotton blend fabric, but it wasn’t light enough. I then revised it and found a 100% rayon fabric. Since rayon is apparently the oldest man-made fabric, I figured it should fit the bill well. It also really does crinkle and wrinkle well, and is fairly inexpensive. What is a tabard anyway?

Since there’s really not a pattern for this, I just measured a 15″ wide piece by the wife’s shoulder height x 4, and cut the fabric. Really I just cut three 15″ wide strips of the fabric, then sewed them together to make the length. Here it is pre-dye: How I do Weathering

The next step was to dye everything the right color and weather it. The clean, white shirt just wouldn’t do, so it got a dip in some tan dye, along with those grey pants. The tabard was much harder as the color is kind of elusive. It’s a gray/brown-ish color, and it took me about 5 tries to get it the right color. I tried everything from coffee to Rit to Dylon, in a few different colors, but finally got it.

Next, I took everything outside and laid it in the grass – and brought a few cans of spray paint! There was a camo tan, a brown, and a black color. I basically sprayed a bit of each on all the pieces to do the weathering and dirty-ing of the outfit. Things went a little overboard though since I didn’t actually look at a reference picture while I did this; the dirty-ing is a bit extreme. I like it because I figure that she’s all alone on this desert planet and isn’t able to bathe or wash her clothes too often – so they should be dirty!! One note about spray-painting on these fabrics is that it made everything stick to each other, even after it was totally dry! I guess those paint particles like to stay together. That really really really messed up the look of the tabard, though. Instead of it hanging down nicely, it all just clumped together! ARGH! I tried static guard and dryer sheets to no avail. In the end, Downy Wrinkle Releaser sprayed generously on the tabard seemed to counteract the sticky paint. Phew!

Unfortunately, since this is a budget DIY Rey costume, I couldn’t go and buy a long, wide piece of leather to make the belt as that would have been pretty expensive. Instead, I headed over to ARC Thrift Store and found a couple of belts with a soft leather underside for a total of $9! I found this pattern for the DIY Rey belt online, and I used some scrap leather to hold them together (on Rey’s left side), half sewing and half gluing it all together. I added some leftover buckles I had from the Captain America costume build, and applied some beeswax from my Kylo Ren costume build (ongoing) to darken the leather. It turned out REALLY nice! While there are really some great options on Etsy for Rey’s hip bag, I didn’t want to spend a lot of money on it. So, I headed back to ARC and found a close-enough Nine West purse for $5.99! Then I proceeded to destroy it. First, I cut off the strap. Then using some 100-grit sandpaper, I removed most of that nice color from the bag. Some nice brown shoe leather leftover from the Captain America boots served well to darken and weather the bag, plus some nice dirt from the garden!

I found the military-style clip that was needed for the front along with an extra piece of leather from a leftover belt, and the bag is pretty much there! Rey’s wrist cuff is definitely unique, although I still don’t know what it’s for. But hey there’s an online template so I didn’t have to figure out how to do it all on my own – and here it is (props to AtelierHeidi!):

For this piece, I used some leftover leather and rivets from the Captain America gloves build, which kept the cost down. Cutting the pieces defined in the template was easy enough, and assembled those pieces accordingly. I then coated the leather in brown shoe polish (from the Cap boots), and glued a piece of foam to the inside for rigidity. The end product looks exceptional, and didn’t cost anything (extra): Creating – instead of buying – Rey’s boots

As you may have seen earlier, I (we) just didn’t want to spend all of that money on those perfect Rey boots. Although they really would have stepped up the whole costume, that was not at all aligned with the whole budget DIY Rey costume goal. So, like any good Internet user, I Googled for other solutions – and found one!

This “Rey boots process” video is pretty darn great. Using that as a reference, I was able to make some very low-cost Rey boots myself!

I bought these boots on eBay, and found some wool-like upholstery fabric at Joann Fabrics as well as some Fabri-Tac glue.

As soon as the boots arrived, I got to work. Just as the video linked above shows, I found it’s important to create the “pattern” by taping up the boot, then cutting out the shape you need. Once that’s done and the fabric was cut, I cut the boots down the middle and glued on the different fabric pieces. Finally, I cut out some leather scrap pieces for the “lace” holes, and added the heel and strap to the back. Once all that was done, they were ready to go – with a total cost of about $25! After a few more modifications to the boots, shortening the tabard, manually adding frey to the shirt, tabard, and arm wraps by sanding the edges, and a test-fitting, the costume was finished!

In the end, the whole costume (excluding staff and pieces I had around the house) cost me $260.38. That’s a pretty good deal! Sure, it took a few months and more than enough headaches, but it was more than worth it. This is the first costume I’ve actually made from scratch, and it really turned out great. I’ll still be on the lookout for those Po-Zu boots, but I won’t hold my breath. It still looks great.

Here it is, in all its wonder and glory: So, what do you think? What might you have done differently, and what other methods have you found for creating a budget DIY Rey costume (or Star Wars costume for that matter)? Let me know in the comments.